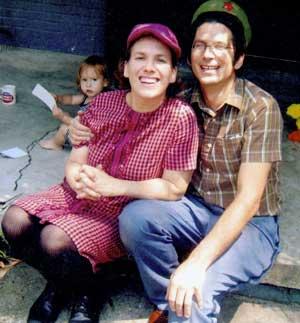 Helen came from somewhere else. Or so it has seemed to many.

That ever-opened heart. That artist for the people. That visionary Luddite pixilator. That lover of language after my own heart, lover of words, as well as of moving images.

Last Friday, dragging through the apocalyptic sadness of their house on North Rampart, Becky and I smiled again at the tidiness of Helen's always personalized filing and storing systems. I have to believe the "slob control" strategy we employed at home when she and Jake were much younger had lasting, beneficial effect. (Ask me about that after.)

At fifteen, every day in her Durham, England, comprehensive school, swatting for O-Levels, she wore the required schoolgirl uniform: grey skirt, grey sweater. I would pick her up after school and we would stop at a bake shop for our favorite English pastry, two caramel slices--for tea. You know Helen did tea parties!

Did she come from somewhere else? Was she too good for the all-too-real world that far too early robbed us -- and her -- of that extraordinary idealism, her gift to all of us?

Helen was very human. No one knows this better than Paul, who had the best of her.

But she was so different, so loving, so enjoying and enjoyable, so unafraid, so authentic that it could take careful watching over time to realize that she was not an airhead, and not an act. Years ago, a young professor of hers at Harvard told us that she had grown to love and respect Helen (of course), but that it had taken two whole weeks of knowing her before she concluded that Helen was for real--in fact, far more the real thing than most of us.

A slow bloomer, she kept intrepidly to the timing of her own trajectory into womanhood. Now everyone recognizes her strength and that confident smile, the daybreak in it and the light that seemed from elsewhere.

To me, she has grown more beautiful every year, through marriage, through creative, handmade work "against the machine", and through motherhood--my Helen as well as yours, my beauty.

Where did she come from? I've loved and watched her for thirty years. She came from her extraordinary mother, in whom I got lucky myself -- and from her kindred-spirit grandfather, Pop, memorialized in the film, "Mouseholes."

And she came to us through this church, more than a century ago led by her great-great-grandfather, a poet as well as a pastor. Helen came through its Sunday school, its catechism class, its community of hopeful dedication to the life-repairing, life-constructing values seeded in the language of its familiar hymns and bible stories.

The teachings of the faith in which Helen grew from childhood fell on well-prepared, fertile soil. And her amazing liberalism grew in response to a gospel of empowered humanitarianism.

What happened to her last week is a daunting, ghastly mystery, impenetrable to our needful search for meaning. But she believed in heaven. And if anyone ever deserved the heaven of traditional belief it was she.

Her life, touching so many others, beautifully illustrates the need to really get the connection between two particular biblical texts, however you take or don't take the Bible. The first, John 3:16, tells us that God so loved the world that he gave his Son that whosoever believes in him will inherit eternal life.

This is but a half-way station on the path of the faithful, like Helen. The second passage, following it, John 3:21, tells us that it is those who actually "do the Truth" who come to the "Light." No mention here of those who simply believe the Truth. There was so much light in Helen, in all her doing -- our girl, our beauty -- "anywhere."

I met Helen a couple of times at the Ann Arbor film festival. It was always a treat to hang out with her. She was a genuine, generous person and a brilliant filmmaker. We hit it off because of our shared taste for calypso music - I had a calypso-themed film in the festival and Paul at the time was playing with Piggy, a band which billed itself as "The #1 Calypso band of the Maritime Provinces".

What a shock to learn of her death. It's tragic and mind-boggling. Please let Paul know I'll be thinking of him.

This is Eve Troeh in New Orleans, a friend of Helen's. Kittee came over today and we recorded the last voice message she left for Kittee and Dazee as an mp3.

Thank you for managing this site! It means so much to have a community place to share memories and information on Helen.

My name's Fausto - I was a friend of Helen's from CalArts in the 90's. Since then we'd kept periodic contact and I was happy & honored to do the sound for her "Madame Winger Makes a Film" short a few years back....and until i left oakland this summer, postcards and artwork from her decorated my walls.

I live in western China now, and have just gotten ths news that's left me among the many, suddenly deeply-wounded by this event. This is wrong, tragic,fucked up. This news is likely among the worst things i've ever heard... Because i've honestly thought of those two all these years as iconic perfect examples of the sweet,earnest, creative goodness possible in this world. nothing short of a pair of walking rainbows to me..... hearing from and seeing their post-Kartina photos was an incredible inspiration ....genuine spirit, man. Could anything keep these guys down? Now what is this? Who is this evil bastard who thought nothing of breaking hundreds of hearts in an instant like this? for what? for a wallet the world's been robbed of so much. I just can't believe this..

So, because I'm so far away, i don't have access to many of the bits of media that I would otherwise be able to easily contribute, nor can i attend any of the memorial gatherings planned, sadly but I do have this: it's a short little segment from a live mix collage radio show I did in 1998 that featured Helen just telling little stories about her grandfather 'Pop'. it's only a couple and a half minutes long, but it's all I have here. It's dear little piece that captures the innocent, colorful sweetness of Helen circa 1994-95 or so.

i will send anything else I am able to muster.
thank you for doing this.
-Fausto

Attached is a framegrab of Helen briefly on camera in a video documentary (ORPHAN IST) made during the Orphan Film Symposium in Columbia, March 2006. Helen attended the 4-day event and of course charmed everyone and made many new friends and fans, myself included. On the final night we screened some of Helen's new prints of her water-damaged, salvaged Super 8 home movies, which she introduced.